With bee health declining, it’s important to ask why?

According to a study conducted by Harvard University, pesticides might lead to “impairment of honey bee neurological functions, specifically memory, cognition, or behavior.”

Let’s focus on the second point.  In order to understand what prompted American beekeepers to start spraying their hives, we need to better understand the magnitude of the problem.

In 1987, the Varroa bee mite (Varroa Jacobsoni) was first detected in the United States.  Varroa is considered the most devastating parasite to honey bees across the world.  As these dangerous mites quickly spread across the country, they infested and destroyed countless colonies of honey bees.

Bees can naturally detect mites in broods (on larva).  When detected, honey bees uncap and cannibalize their pupae. With a large infestation, CDB becomes a highly visible disaster.

This is the progressive stage of mites’ growth and infestation. When bees begin showing deformed wing virus infection, they are usually eliminated by the other bees. The visibility of DWV is becoming a major concern in order to save beehives. Left unchecked, it will destroy the entire colony.

The use of these organochlorine pesticides started from a belief that it was more humane to protect the colonies against the threat of varroa.  A tiny minority, however, recognized that using pesticides would handicap the bees in the future and make them dependent on artificial supplements.  This minority began the treatment-free beekeeping movement, refusing to introduce chemicals into the beekeeping process.

One of these beekeepers was our very own, Danny Weaver, of Bee Weaver apiaries.  A 5th generation beekeeper, Danny’s family has been keeping honey bees in Navasota, TX since 1888 and never once introduced pesticides onto their land. Being a bee geneticist, Danny began selecting queens whose hives, generationally, demonstrated incremental strength and resilience to the varroa mites.  Years later, Bee Weaver colonies are so evolved that you can witness the worker bees pick up and remove the Verroa mites themselves.

The treatment-free beekeeping approach teaches beekeepers that treating bees for disease actually prevents the bees from developing genetic or behavioral adaptations needed to copy on their own. These genetically superior characteristics are passed along from drones (male bees) to the queen during the mating process.

Read “Apis Melifera” for more information on the social systems of honey bees.

Treatment-free beekeepers choose to allow disease to run its course in a hive.  As a result, the weaker colonies die out and the stronger, well-adapted colonies survive.

And because our beekeepers don’t cut corners with chemicals and never have, Bee Delightful has access to some of the cleanest honey in the world.  Canna Bees honey is tested by the USDA for the concentration levels of trace amounts of pesticides.  At a Parts Per Million (PPM), our honey tests for No Detectable amount of any pesticides.

Many beekeepers debate the nuances of the definition of Treatment-free beekeeping, each believing in different ideals.  Most treatment-free beekeepers believe the philosophy speaks to a more hands-off approach, allowing the bees to behave in the most natural way possible.  The less stress on the bees, the better honey they’ll produce.

This is why Canna Bees Rescue Blend™ is so incredibly delicious.  One spoonful is all you need.  And whether you purchase jars of Canna Bees or not, support beekeepers that care about the long term health of our beloved pollinators. 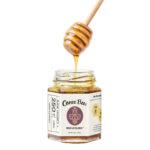 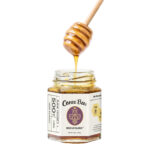 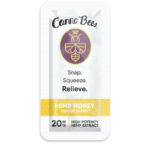